Theology of History
Times of the Antichrist - I

From the Apocalypse & Revelations

Homer Sweeney
The Apocalypse reads: “And a great sign appeared in Heaven: a woman clothed with the sun, and the moon under her feet, and on her head a crown of twelve stars: And being with child travailing in birth and was in pain to be delivered.” (Apoc 12:1)

The Church is ever in labor to bring forth children to eternal life. In the sad days here predicted the sorrows and pains of delivery shall be increased many fold. 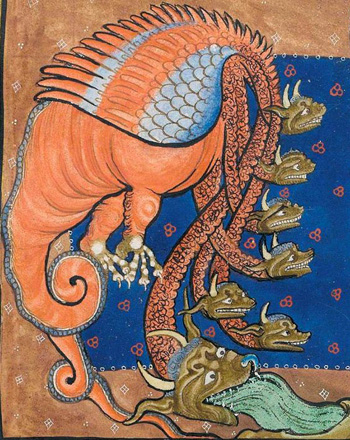 “And there was seen another sign from heaven: and behold a great red dragon, having seven heads, and ten horns and on his head seven diadems: And his tail drew a third part of the stars of heaven, and cast them to earth:” (Apoc. 12:3)

This represents the cunning hypocrisy he uses to deceive a large number of the priests and the people, a third part of the stars. Those powers of the dragon indicate that Satan’s attacks against the Church will be organized and carried out by the governments and ruling powers of those days.

These words apply to the past of the Church. Arianism, indeed, led astray many bishops, priests and peoples. The Protestant Revolution of the 16th century seduced still a larger number.

But these precedents cannot be compared to the numbers seduced by Satan in the days of Antichrist.

How was the Antichrist defined in Sacred Scripture?

There are two phrases in the Epistle of St. John that I can quote using the word antichrist:

The Douay-Rheims New Testament interprets this last passage as referring to the antichrist, to the spirit of antichrist, which is now already in the world. It is not the chief and great Antichrist, who will come at the end times, but his precursors, in whom he is somehow present by his spirit. According to St. John the Evangelist every teacher of error and every adversary of the Church is an antichrist.

As far as I know, these are the only two passages in which the word antichrist is used in the Sacred Scriptures. But Our Lady uses the term at La Salette: “Rome will lose the Faith and become the seat of the Antichrist.”

The concept of Antichrist dates back to the time of St. John the Evangelist and in this series of articles I will use the word antichrist frequently denoting those who display the spirit of denying that Jesus Christ is God or those who apostacized from the Fatih.

The successes of Satan

To explain the success of Satan we must first remember what Christ said to Pilate: “Thou should not have any power against me, unless it were given to thee from above.” (John 19:11) 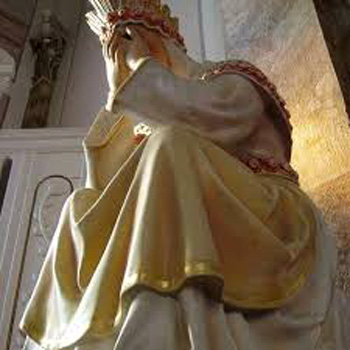 Our Lady of La Salette

St. John the Evangelist explains that it is Christ who permits trials and tribulations as means of sanctification for souls and an increase of fervor and holiness in the Church. Did you ever consider the fact that you are being tested?

In the Secret of La Salette, it is foretold that in 1864, Lucifer, together with a great number of devils were loosed from Hell; little by little they abolished the faith, and even in persons consecrated to God...

On September 25, 1888, Pope Leo XIII heard a conversation between the Devil and Jesus Christ. The Devil boasted that he could destroy the Church, if he was granted 100 years. The Devil also asked permission for “a greater influence over those who will give themselves to my service.” To the Devils request, Our Lord reportedly replied: “You will be given the time and power.”

A few observations about the Hierarchy and others in the Church might be in order before we review the Apocalypse .

Anne Catherine Emmerick, who had the stigmata of Our Lord, described the great apostasy in the Church that was shown to her:

“Among the strangest things that I saw, were long processions of bishops. Their thoughts and utterances were made known to me through images issuing from their mouths. Their faults towards Religion were shown by external deformities. A few had only a body, with a dark cloud of fog instead of a head. Others had only a head, their bodies and hearts were like thick vapors. Some were lame; others were paralytics; others were asleep and staggering.”

“Then, I saw that everything that pertained to Protestantism was gradually gaining the upper hand, and the Catholic Religion fell into complete decadence. Most priests were lured by the glittering but false knowledge of young school-teachers, and they all contributed to the work of destruction.” 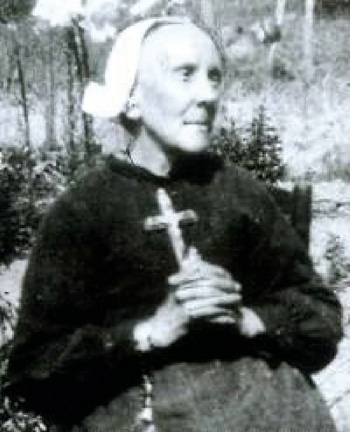 Marie-Julie Jahenny could be the greatest female mystic and stigmata in the History of the Catholic Church. Blind, deaf, dumb and crippled , she subsisted miraculously on the Blessed Sacrament alone for the last years of her life. In 1910, Our Lord appeared to her, warning the world that a new liturgy would one day be instituted:

“I give you a warning. The disciples who are not of My Gospel are now working hard to remake according to their ideas, and under the influence of the enemy of souls, a Mass that contains words that are odious in My Sight. When the fatal hour arrives where the Faith of my priest is put to the test, it will be these tests that will be celebrated in this second period.

“The first period is the one of My Priesthood, existing since Me. The second is the one of the persecution, when the enemies of the Faith and of Holy Religion will impose their formulas [Vatican II] in the book of the second celebration. Many of My holy priests will refuse this book, sealed with the words of abyss. Unfortunately, among them are those who will accept it.”

Would you not agree that this is what is happening in our days?

When we try to put in perspective the times in which we live, the prophecies coming from the vision of Pope Leo XIII, Anne Catherine Emmerich and Marie-Julie Jahenny appear to interpret Vatican II and the New Mass as successes of Satan and events that bring to mind those Apocalyptic metaphors of a dragon persecuting the Church, who must flee to a desert.